When it comes to shopping for a new snowboard, figuring out the proper size for you might just be the hardest task. You have to consider your height, weight, boot size, ability level, and riding style among other things. However, once you determine your general size range, shopping for a new board becomes a much easier process—or so you thought…enter volume shifted snowboards!

To be honest, the first time I heard a snowboarder describe their set-up as a volume shifted snowboard, I had no clue what that term meant. What the heck was this new technology? Was it a gimmick, or did it offer value that a normal board didn’t?

Chances are you’re probably wondering the same thing! Whether you’ve heard the term volume shifted before and don’t know why it matters, or if this is a completely foreign concept to you, worry not. In this article, we’ll cover everything you should know about volume shifted snowboards; by the end of it, you’ll practically be a gear expert!

A Brief History of Volume Shifted Snowboards and Surfing

Like many advancements in snowboarding, the idea of volume-shifted snowboards was derived from surfing. While you don’t have to be a surfboard expert to understand volume shifted snowboards, a bit of context is helpful.

At some point, surfers figured out that if they made their surfboards wider and thicker while also making them shorter, they could get the best of both worlds: a surfboard that is both adept at paddling and catching waves and easy to maneuver.

This innovation, the hybrid surfboard, was versatile in multiple settings and didn’t ride like previous boards. This, ladies and gentlemen, is what the volume-shifted snowboard was inspired by!

But Seriously, What Are They?

Simply put, a volume shifted snowboard has a large waist width and is meant to be ridden 3-6cm shorter than your normal snowboard size. Volume shifted boards possess the same surface area (volume) as a longer board and, therefore, have the same advantages. However, since the surface area is displaced—or shifted—to the width of the board, a rider can use a version that is less lengthy, simultaneously giving him the advantages of a short snowboard!

If that definition left you confused, don’t sweat it. Wrapping your head around the volume-shifted-board concept can be tricky at first! Here’s another way to think about it: Volume shifted boards have decreased length and increased width—effectively keeping the surface area identical to that of a longer board with a standard waist width.

So What? Figuring Out the Goal of Volume Shifted Snowboards

Longer snowboards typically provide good stability when riding at high speeds, can hold carves well, and float through deep snow more easily due to their large surface area. Due to these reasons, many riders will opt for longer snowboards as their freeride, backcountry, or powder boards.

Short snowboards are typically lighter, easier to pop into the air, facilitate maneuverability more easily, and can be spun with less effort. Subsequently, snowboarders who enjoy riding in terrain parks often choose a shorter snowboard as their freestyle board.

Volume shifted snowboards can offer the best of both worlds and provide qualities found in both long and short boards! Another advantage of volume shifted boards is that they’re great for riders with larger boots. Since they possess such a wide waist width, riders with large feet don’t have to worry about common concerns like toe or heel drag.

Who Should Consider a Volume Shifted Snowboard?

The short answer to this question is everyone. Everyone should consider a volume shifted snowboard if they’re interested in it! These boards come in so many different styles that there’s almost certainly a model you’ll enjoy.

It is worth noting that volume-shifted snowboards typically have a learning curve. So if you’re a brand new rider, you may want to hold off. But if you’re an intermediate or advanced rider, you’ll have no problems.

The Ride Warpig is one of the most popular volume shifted snowboards on the market. It is an all-mountain board you can take all over the resort. With a medium flex and a rocker profile, this board can ride anything from steep and deep pow lines to casual groomers, and even handle its own in the park! It is built with “cleave edges,” or steel-reinforced edges which provide extra durability. For these reasons, the Ride Warpig is truly one of the most well-loved snowboards in the volume-shifted category.

If the Ride Warpig is a friendly introduction to volume shifted snowboards, the Ride Superpig is its ultra-aggressive counterpart. This snowboard wants to ride hard and fast; the more snow the better! With a much stiffer flex than the Warpig and a predominantly camber profile, the Superpig offers great edge hold when carving! Both the Superpig and Warpig have a “tapered bi-radial” sidecut radius that provides extra grip through turns and stability on flat base. Overall, it’s a great choice for those who want a specialized snowboard for off-piste riding.

The Bataleon Party Wave is another freeride/powder snowboard, though this board has a much softer flex than others on this list. This flex rating makes it quite playful and gives it a very laid-back, surfy feel. This snowboard works well as a freeride board because, despite its soft attributes, it has a big ol’ nose and a tiny tail. This makes it a breeze to float through powder, chunder, slush, or anything else you might encounter freeriding!

The Gnu Gremlin is similar to the Ride Superpig in the sense that it possesses a stiff flex, aggressive camber profile, and is built to ride hard and fast. However, it leans slightly more all-mountain than the Superpig does, and it can be ridden on groomers just as effectively as off-piste.

This board is designed with Magne-traction edges: strategically placed serrations along the edge of the board that act as extra contact points and provide more traction and edge hold.

It does have a larger setback stance than any other snowboard on this list: the inset packs (the location where bindings are mounted) are set two inches back from the center of the board. This setback stance gives the rider the ability to charge over chunder with no issues! Just don’t expect it to ride switch as a true twin shape or directional twin shape would.

There’s no denying that volume shifted boards have become a staple in the snowboard industry. If you think you’re ready to take the plunge and get your very own volume shifted board, Curated is the place to go! We’ve got plenty of different volume-shifted board options, and even better is the fact that you can get personalized advice on which is best for you.

That’s right, here on Curated, you’ll be matched with a Snowboard Expert, have a conversation via chat, and can get personalized recommendations based on your needs and wants, all for free! It’s the quickest and easiest way to find the perfect gear and have it at your door in a matter of days!

5.0
Gaelen Mast
Snowboard Expert
Gaelen here! How can I help?
Like this article?
Share it with your network
Written By

4 Common Mistakes When Buying a Snowboard
In the market for a new snowboard for next season? Read through these four common yet avoidable mistakes that are often made when buying a new board!

What Size Snowboard Is Right for You?
Choosing the correct board size can be a complex process with a number of important factors. Snowboard Expert Bobby Chadderton is here to help with a handy sizing guide!

Expert Review: Ride Sage Snowboard Boots - Women's
This review is my honest opinion of the boots which I purchased with my own money in January of 2021.

What Are Snowboards Made Of? An Expert Guide to Snowboard Construction
Snowboard Expert André Santos explains the levels of construction in a snowboard and how this info can help you find a snowboard that's perfect for you!

How to Buy a Beginner Snowboard
Snowboard expert Brit Bruhn shares the most important things to look for when shopping for your first snowboard.

How to Buy a Powder Snowboard
Snowboard Expert Gaelen Mast explains what makes a powder board different than other types of snowboards and what to look for when shopping for a powder board!

What to Expect If You’re a Skater Looking to Start Snowboarding
Ready to take those board skills from the streets to the steeps? Read on to find out how skateboarding translates to snowboarding and how to choose the right board!

Expert Review: Never Summer Proto Ultra 157
This review is my own honest opinion of the snowboard, which I bought with my own money in January 2021.

Expert Review: Patagonia Powder Bowl Pants
This review is my honest opinion of the ski pants, which I purchased with my own money in March of 2022.

Expert Review: Flylow Tough Guy Gloves
This review is my honest opinion of the gloves, which I purchased with my own money in June of 2021.

Expert Review: Blizzard Rustler 9 Skis · 2020
This review is my honest opinion of the skis, which I purchased with my own money in January of 2019.

When Should You Replace Your Ski Helmet?
Keep your noggin safe on the slopes this year by checking out these 13 scenarios that might have you wondering if you should replace your ski helmet!

How Often Should You Replace Your Skis?
Ski Expert Tom Bartholomew walks you through all the factors in replacing your skis and explains how to keep them in good shape in the meantime! 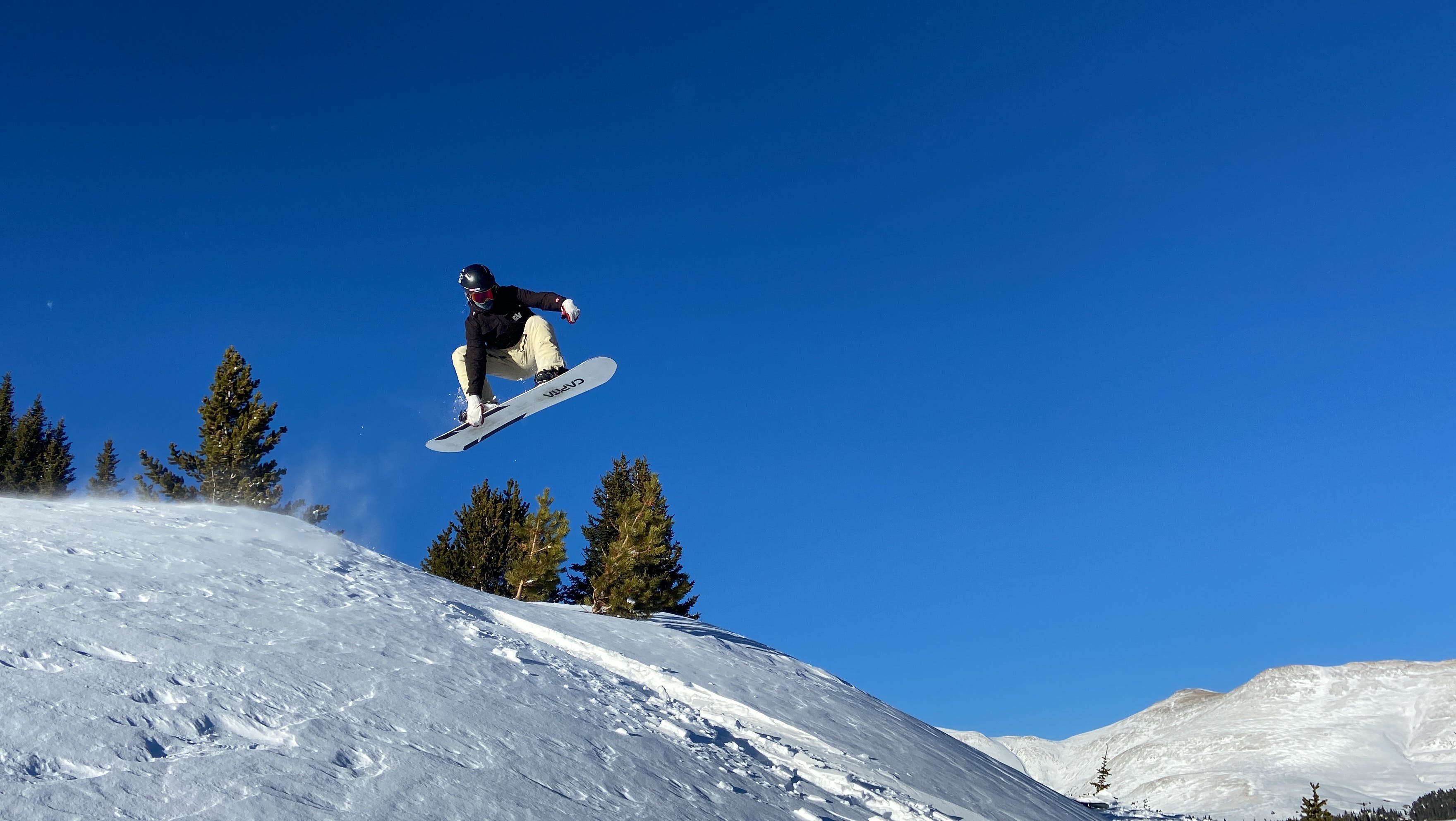 Expert Review: CaPiTa Mercury Snowboard · 2022
This review is my own honest opinion of the snowboard, which I bought with my own money in November 2021.

What Is MIPS and How Can It Protect You from Brain Injury?
Ski Expert Ian Greenwood explains what MIPS is and what to look out for when buying a ski helmet so you can be sure your head is protected.

How to Teach Kids to Snowboard
Snowboard expert Aniah Warne runs through how to spark a love of snowboarding in your kids and enable them to ride by your side on the mountain.

New Year, New Gear: What Our Snowboards Experts Are Excited About
With the start of a new year, our Curated Experts are looking forward to 2023's best snowboarding gear. Catch up with Bri Dornisch on the gear with celebrating.

Expert Review: Rossignol Blackops Gamer 118 Ski
This review is my own honest opinion of the skis, which I bought with my own money in November 2018.