Curated Ski Experts Hayden Wright and Brandon Westburg got their hands on the 2023 Faction Prodigy 3 this spring and put it to the test on a bluebird day at Powder Mountain in Utah. Check out how it performed in the carving, freestyle, and freeride categories, but don’t forget, every skier is unique; if you have any questions about the Prodigy 3 or would like recommendations on what ski would be ideal for your needs, reach out to a Ski Expert here on Curated.

Before we jump in, a quick note that Curated Experts are not sponsored by any brands, all of these reviews are completely unbiased.

[Hayden] Faction states that the Prodigy 3.0 is the daily driver for everybody. It's a ski for people that love to carve and love to ski in the trees. Mostly it is a freeride, freestyle, new school-style ski that is full rocker in the tip and the tail, and camber underfoot. I heard that they beefed up the edges in the Prodigy lineup. These have a slightly wider edge, which is not only going to help your grip and your hold on those steep slopes, but it's also going to help the durability of the ski.

[Hayden] The Faction Prodigy 3.0 is 106 millimeters underfoot, which is a little bit wider than most carving skis. But surprisingly it's loaded with camber underfoot and it holds edge great. Faction claims that it's a seven flex on the scale, which I think it might be a little bit stiffer than that because I didn't get any chatter at all. The last thing you want when gaining a lot of speed and trying to slow down is having that ski start to clap. It was great for carving and in uneven terrain (chunder, and chop like that) it held its own. It isn't the stiffest ski out there, so I wouldn't necessarily call this your burly ski that's going to just bash through everything like early morning hard pack or ice. But, right now it's super slushy here at Pow Mow, and these were an absolute dream to ride.

[Brandon] I got to ski it on a decent variety of terrain. I caught some air, did some switch turns, skied some groomers, and some trees as well. Got into the two inches of snow that fell last night and these things were smearing around and were a ton of fun. I can only imagine how fun this thing is in some deeper snow. Being 106 millimeters underfoot, some might see it as a little bit too wide to get boogieing down in the park, but I think 106 is just fine. We see Armada do this with the ARV106. I think that this ski is plenty capable of being in the park. It's a little bit heavier than its younger brother, the Faction 2.0 Prodigy. There’s definitely a little bit more swing weight here if you're looking for park purposes, but it’s an amazing all mountain and powder ski.

How was it edge-to-edge?

[Brandon] On groomers, it moved edge-to-edge fairly quickly, and smeared some turns as well. Note that we're dealing with a 20-meter turn radius here and it was almost hard to believe as I was able to smear this around and carve those short radius turns with almost no problem. I had a ton of fun getting jibby on this thing and catching some air.

Overall, it’s a really fun, supportive ski that had a lot more backbone, in my opinion, than the Prodigy 2.0. I’d give it eight out of ten flex stiffness-wise from Faction. They say the Prodigy 2.0 is a seven out of ten, so there’s a little step up in stability and edge hold here. These also have the XL edges this year. I'm hoping they can really help improve edge hold from prior years' Prodigy series. And, with durability, hopefully we should see these skis last a bit longer.

What are your impressions on switch, stability, and landing? [Hayden] The Faction Prodigy 3.0 was absolutely fun. There’s a super poppy ski design for riders that'll be boosting over trees, maybe snow fences, ropes, or snow machines. It’s an energetic ski made for the skiers and riders that just love boosting off things. It does have rocker in both the tip and the tail, but that being said, it was really easy to ride switch. There is a lot of rise in the tail too, for landing switch in powder. Or, if you ended up going switch through a little bit of chunder, which isn't ideal, this ski is going to have your back.

For somebody who wants to do some park laps, how is this going to perform?

[Brandon] As Faction states, the Prodigy 3.0 is less a park performance ski and more so an all-mountain powder performance ski. It definitely has its purposes in the park, but I totally see what Faction means about making the entire mountain your playground. These do really outside of the park, but can certainly get jibby on the rails and jumps, and offer plenty of solid landings. I was able to do some threes and tail butters. Still, if you're thrashing them in the park, they're going to fall apart on you like any park ski. But I have great confidence that the XL edges here, and the changes that Faction made in the Prodigy series, will make it more durable.

How does it feel in powder and chunder?

[Hayden] We had a chance to take these skis through a pretty fun tree run later in the day here at Pow Mow. It does a great job and has a 20-meter turn radius but I found that it turned a little bit quicker than that. In uneven terrain, you have that 106 millimeters under foot. So, if you're landing with most of your weight on one leg, rather than centered, you're going to feel safe.

Is there any location you'd pack this ski for? [Hayden] I would take it home to Alaska. I'd go rip it up with the boys in Turnagain, and go smash around Alyeska. It would be that ski that's just able to handle a lot of stuff. If you're wanting to ski the steeps, if you're going on a trip where there's going to be an excellent storm in the forecast, the Prodigy 3.0 is going to be a great ski to pick.

Who would you recommend this ski to?

[Hayden] I would recommend this ski to any skier that's at intermediate level or above because it adapts to anybody. If you're just ripping around the groomers but you sometimes play off the groomer, it's 106 underfoot so it's going to be there for you.

[Brandon] I would recommend the Faction Prodigy 3.0 to those intermediate, advanced, and expert all mountain park skiers—even powder skiers as well. I would feel confident recommending it to those intermediate skiers looking to get into all mountain and powder skiing, all the way up to those advanced skiers. This ski also has plenty of pop, stability, and support to support all of those upper ability level skiers.

Who would you not recommend this ski to?

[Hayden] I would not recommend the Faction Prodigy 3.0's to an ultra-beginner skier because 106 millimeters underfoot can be a little bit much at that stage. That being said, if you're a beginner and you plan on going 20+ times, this could be a good one to try to push yourself and set yourself up to advance.

[Brandon] If you like more of a narrow park ski with a little less swing weight, this ski might not entirely be for you. Skis work differently for different types of skiers.

If you have any questions about the Faction Prodigy 3.0, or want help finding the right ski for you, reach out to Hayden, Brandon, or any other Ski Expert here on Curated.

5.0
Hayden Wright
Ski Expert
Hayden here! How can I help?

5.0
Brandon Westburg
Ski Expert
Brandon here! How can I help?
Like this article?
Share it with your network
Written By

Hayden Wright
Ski Expert
I grew up in Alaska loving the outdoors. I became hooked on skiing at a very young age and haven't looked back. I enjoy skiing deep pillows in the backcountry and enjoying the terrain parks. I am always pushing myself to progress. I love meeting new people and am always the most stoked person in the...
View profile

Brandon Westburg
Ski Expert
I am a passionate east coast skier who loves skiing no matter what. Rain, sleet, snow, sun, I'm still having fun! I hop on skis for as many days possible each season. (205 days for 22' season!) Currently, I am an avid freestyle skier and Level 200 Certified Freeski coach. I work with 20 skiers all w...
View profile

Expert Review: Faction Skis Prodigy 2.0x Skis · 2022
This review is my honest opinion of the skis, which I purchased with my own money in September of 2021.

Expert Review: Faction Skis Prodigy 3.0 Skis · 2022
This review is my honest opinion of the skis, which I purchased with my own money in December of 2021.

Expert Review: Faction Ski Candide 3.0
This review is my own honest opinion of the skis, which I bought with my own money in January 2017. 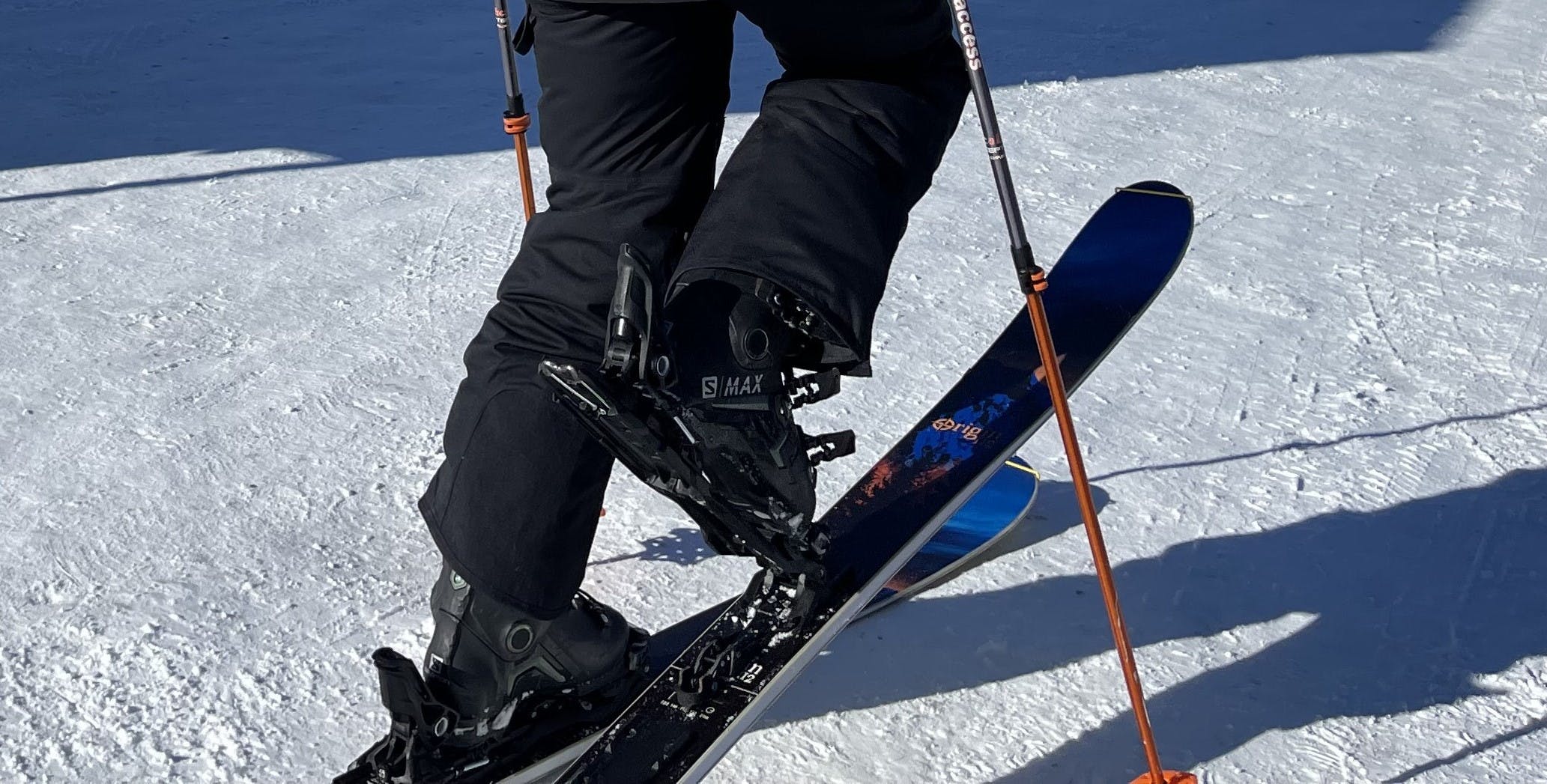 Expert Review: Salomon S/Max 120 Ski Boots · 2021
This review is my honest opinion of the ski boots, which I purchased with my own money in February of 2021.

Expert Review: Smith Maze Helmet
This review is my honest opinion of the helmet, which I purchased with my own money in March of 2022.

Expert Review: Burton Deep Thinker
This review is my own honest opinion of the snowboard, which I bought with my own money in December 2018.

What Snowboard Binding Angles Should You Use?
Snowboard Expert Bobby Chadderton runs through how your bindings affect your riding and what you can do at home to ride more comfortably.

Expert Review: Burton Cartel X EST Snowboard Bindings · 2022
This review is my honest opinion of the bindings, which I purchased with my own money in December of 2021.

Expert Review: Salomon S/Pro 120 GW Ski Boots · 2023
This review is my honest opinion of the ski boots, which I purchased with my own money in October 2022.

How I Became a Curated Expert
Ski expert Peter Reichheld shares how his deep passion for skiing and addiction to gear brought him to Curated.

Expert Review: Head Kore 105 Skis · 2023
This review is my honest opinion of the skis, which I purchased with my own money in October of 2022.

Expert Review: GNU Riders Choice Snowboard
This review is my honest opinion of the snowboard, which I purchased with my own money in January of 2022.

An Expert Guide to the Different Types of Snowboard Bindings
Baffled by the number of snowboard binding styles out there? Snowboard Expert Bobby Chadderton breaks them down to help you decide.