Get to know Edward Clem, Curated Ski Expert, who took his passion for skiing into the film industry.

From the moment Ed Clem clicked into his first skis, he was sold – never mind that he crashed into a parked car on his first run. “I was completely and blissfully unaware and in my own world,” Clem said. “I was full-blaze hooked from the first moment.”

Clem, now a ski filmmaker and Curated Expert, has successfully filmed two ski movies, crediting his “dominating passion” for skiing as a catalyst to his success. His first film, Book of Pow was screened at two international film festivals in 2019.

From his first time skiing at eight years old to his studies in photojournalism a decade later, he developed two driving thoughts: 1. He would film a ski movie, and 2. It wasn’t going to happen if he didn’t have the money.

He was determined to use his love for skiing to finance his journey in film. Five years ago, Clem stumbled upon Curated, an online marketplace looking for Ski Experts to sell ski gear. By discovering a job that put his 20 years of skiing to use, while also offering flexible hours and remote work, he had the security to focus on filming.

“I've worked two full-time jobs for the last five winters. I film and I work at Curated,” Clem explained. ‘This job has helped support my transition into a tough field to get into. It really has played a big role in allowing me to get where I am now in the ski film industry.”

At this point in his career, Clem has filmed two amazing winters, built important connections, and created a reputation for himself. But he knows that he’s far from being comfortable with his success.

“I always want to become better,” he said. “Satisfaction is gratifying, but it's also temporary. That's what drives people to continue advancing in their life, and I found that drive in skiing. If I’m just doing the same thing on the mountain, I’m probably going to get bored with it. I know that I need to find new ways to enjoy myself, even in a job.”

Clem’s desire to both achieve and be consistently driven by passion is equally impressive and uncommon in today’s workforce. “People become complacent at some point,” he said. “That's what keeps me looking for new things in life."

Clem says that while he believes in not being complacent and wanting to pursue new goals, he can’t imagine not being involved in skiing and continuing to work on Curated each season.

“I still enjoy selling skis and filming tremendously,” he said. “It's not the only thing that I want to do. I will continue to branch out into different things. But when summer turns to fall and it starts getting colder out, I'm always captured by that same feeling of ‘I need to get ready, winter is coming, and I love this.”

Clem’s sentiment can be summarized into one word: passion. He reiterates that skiing is the dominating passion in his life. He is driven to not only maintain skiing as a staple in his life but also prioritize sharing that joy with others – something he has in common with every Expert on Curated.

“The Experts at Curated are incredibly passionate about the sport that they pursue and that is so important,” Clem shares. “I get excited about being an Expert again as ski season comes every year.”

Clem loves to talk to anyone who comes to Curated interested in skiing or looking to try it out. Through his ski films, he can spread the hype, and through his work at Curated, he can properly set up skiers to succeed.

“I love giving people the opportunity to enjoy skiing more, and equipment is a huge part of that. For me to be able to help coach people in a friendly way, build a relationship with them, and get paid to do it? It means everything.”

While Experts like Clem are spreading excitement about the sport and dedicating themselves to their love of skiing, he knows how important it is for new skiers to find support in entering a sport that isn’t easy (cue: Clem’s first ski experience).

“Most ski shops only carry a few brands, they have a pretty small stock of gear, or they are incentivized to sell certain brands or certain products to you,” Clem said. “Experts are never incentivized to do that. Skiers get to interact with people, like me, while shopping online, and you’re with people, meeting people, and learning different perspectives. It’s an incredible part of my ski experience.”

5.0
Edward Clem
Ski Expert
Edward here! How can I help?
Like this article?
Share it with your network
Written By

Edward Clem
Ski Expert
Since I was four years old, skiing has been the dominating passion in my life and the main force with which I have built my career. As a filmmaker specializing in winter sports, gear is at the forefront of my day to day life. The professional skiers that I work with rely on their gear to keep their...
View profile

The Boards That My Favorite Pros Ride: Tommy Gesme, Jed Anderson, and Dillon Ojo
Snowboard Expert Joseph Attwood walks us through three professional snowboarders, the snowboards they ride, and why the pros love these boards in particular! 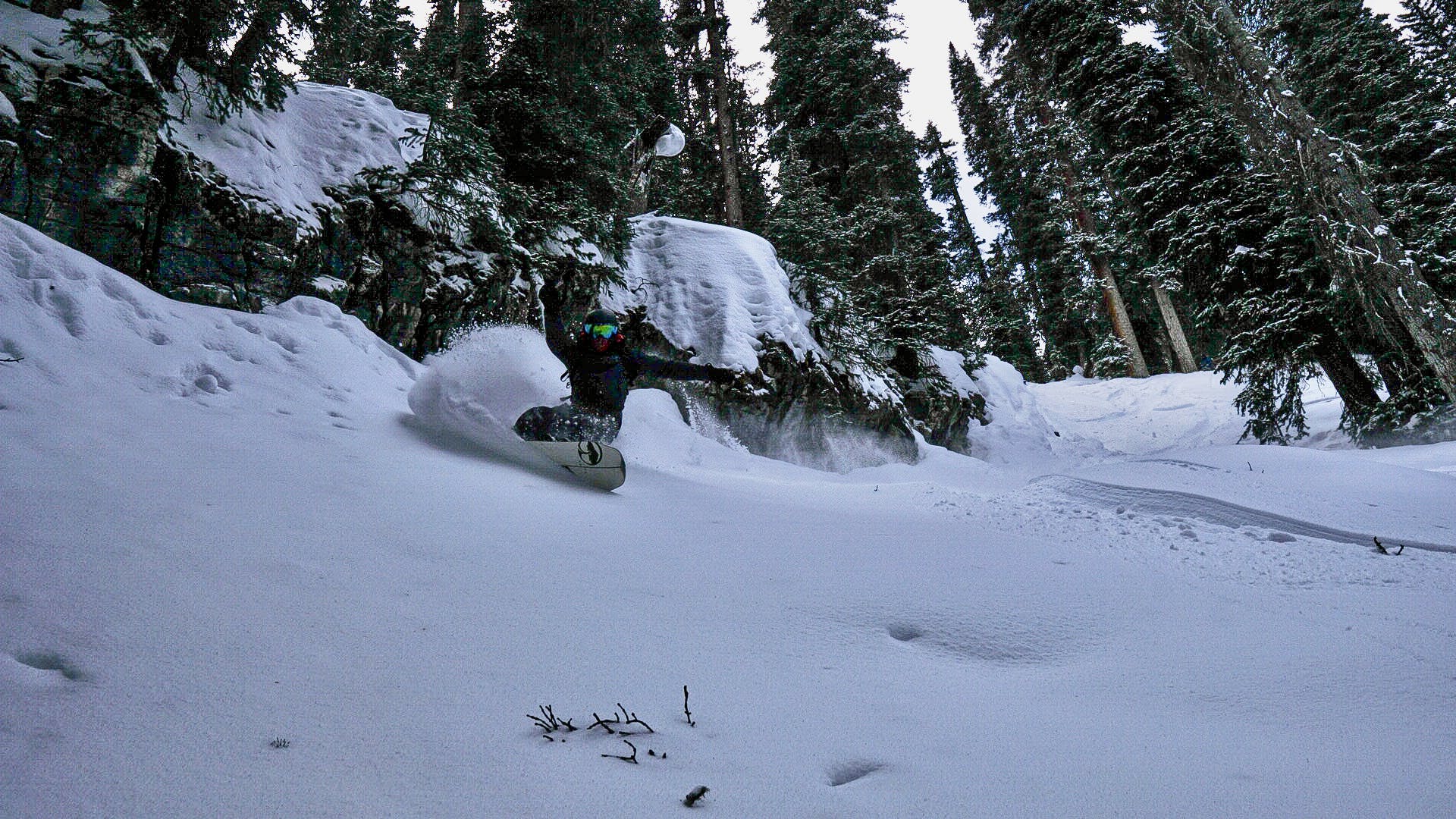 A Day in the Life of a Curated Ski Expert
Ski Expert Abby A. brings you along for a typical day with her on the slopes of Vermont.

Snowboarding's History: From Fringe to Mainstream
Snowboard Expert Jason Robinson takes us back to the humble beginnings of snowboarding and explains the progression that made the sport what it is today!

Ready to Start a Company? 10 Outdoor Gear Leaders Offer Advice to Entrepreneurs
CEOs, founders, and executives from among the most innovative outdoor companies share their top tips for launching a brand.

How Hard is Running an Outdoor Brand? 8 Founders and CEOs Discuss Their Biggest Challenges
Outdoors Journalist John Briley connects with eight industry leaders on the biggest challenges they face day to day in their jobs.

Where Did Snowboarding Come From?
Have you ever found yourself wondering where snowboarding came from? From snurfing to the East vs. West rivalry, this article explains it all.

The Details of Artificial Snow: Is It the Future of Skiing?
If you've spent any time at ski resorts, chances are that you have seen snow-making machines. Read on to learn about man-made snow and what it means for skiing.

My Journey to Snowboarding: First Time in the Snow to Instructor in Two Years
Self-taught Snowboard Expert Corey Hicks shares how he became a snowboard instructor in only two years. Follow along with his inspiring story!

10 Pro Skiers to Keep Your Eye on This Season
Ski Expert Michael Dobson gives a list of the top 10 skiers who you're going to have a blast watching as they take the sport to new levels!

Expert Review: Look SPX 12 GW Ski Bindings · 2023
This review is my honest opinion of the bindings, which I tested for three days in December of 2021.

Expert Review: Dynafit Hoji Free 110 Ski Boots · 2023
This review is my honest opinion of the ski boots, which I purchased with my own money in November of 2021.

Expert Review: Smith Vantage MIPS Helmet · 2022
This review is my honest opinion of the helmet, which I purchased with my own money in January of 2021.

Expert Review: Volcom Men's Brighton Pullover
This review is my honest opinion of the jacket, which I purchased with my own money in December of 2021.

Expert Review: K2 Reckoner 92 Skis · 2022
This review is my honest opinion of the skis, which I purchased with my own money in September of 2022.

16 Father’s Day Gift Ideas for Snowboarder Dads
Some gift ideas from Snowboard Expert Michael Biasuzzi for your snowboard-loving dad that'll be sure to get him stoked to be back on the mountain this winter!

Expert Review: Volcom Women's Elm Stretch GORE-TEX® Bib Pants
This review is my honest opinion of the pants, which I purchased with my own money in November of 2021.

X Games 2022 Skiing - Highlights
The 2022 Winter X Games were wild from start to finish with jaw-dropping moments and surprises at every turn. Ski Expert Allie Staffen goes over it all!

What Are Ski Boots Made of and Does It Affect Your Performance?
Ski Expert Skylar Waggoner overviews some of the materials used in ski boots, their impacts, and the trade-offs associated with them.