Learn the secrets to finding the best snow on the mountain from ski expert, Thomas Harari.

As someone who skis the same resort at least a few times a week, I’ve learned how to find the softest snow on the mountain every day. There’s much more to it than finding untracked powder. How do you find good snow when there is no fresh snow to be found? With a basic understanding of the movement of the sun and Earth, you can start to make informed decisions and be strategic in your run choice to ski the best snow possible every day.

Factors to Keep in Mind

The Earth’s Direction of Rotation The Earth rotates counterclockwise when viewed from the North Pole. This means that the sun rises in the east and sets in the west, which in turn means that east-facing slopes get more morning sun, and west-facing slopes get more afternoon sun. Afternoon sun is typically warmer, as the warmest part of the day is usually in the afternoon.

North-Facing Slopes Because of the curvature of the earth, a north-facing slope in the Northern Hemisphere will not get much sun during the winter. Check out the below diagram. That red slope will not actually see the sun at all, while the black one will have pretty direct sun all day.

How the Sun Affects the Snow When the snow is still in powder form, even if it’s skied out or packed, the sun will cause some melting, causing it to later refreeze and become icy. If the snow has already been refrozen once, the sun will soften the snow and make for better skiing.

Slope Steepness and Elevation The steeper the north-facing slope, the less sun it will get, but a steeper south-facing slope will get extra sun. This means that the most shaded slopes of all time will be north-facing and as steep as possible.

Temperature Swings The temperature is always going to fluctuate in the mountains, but you will want to watch the temperature specifically since the last snow to see if it has thawed or refrozen.

For the most part there are two different scenarios: 1. Cold Temperatures - It’s stayed cold or relatively close to freezing with not much direct sun. There is no new snow and the mountain is firm or icy. Look to north- or east-facing slopes where there has been little sun to see if there is still soft snow that hasn’t seen the sun yet! If it warms up above freezing, check out some of the south-facing slopes to see if the extra sun they are getting causes them to soften. 2. Warm Temperatures - It’s been spring skiing in soft slushy snow. Each morning the mountain is rock solid, but throughout the day it warms up. In the morning, check out south-facing slopes that have been getting sun as they will soften sooner than others. If you find that these slopes get too soft and slushy, transition to more north-facing slopes where there is less sun.

The Wind Wind can carry snow from one area on the mountain to another. On windy days you may find some areas to be especially icy. Follow the wind from these areas to see if you can find where all of this snow is blowing to. If the snow has stayed cold and dry, these windblown pockets can feel like skiing fresh powder (and even refill themselves in between runs). If the snow is wetter, these pockets may be very challenging to ski, sometimes the consistency of wet sand (not so fun).

Scenario 1: Cold and Dry - No New Snow It hasn’t snowed in a while and been in the teens for a week! Things are super firm. Check out those north- and east-facing slopes to see if there is softer snow left, and see if there is anywhere the wind has deposited it!

Scenario 3: Dust on Crust You got new snow overnight, but previous days have created some serious ice underneath! If it has been warm recently, head to the south-facing slopes where the snow underneath may not be as frozen. If it’s been cold, try and find the most shaded north facing snow possible. Hopefully the old snow underneath didn’t melt and then refreeze!

The snow changes every single day, and even throughout the day, so sometimes part of the game is chasing that good snow! Ever wonder how some people can ski three to five days a week at the same resort? This is what keeps us entertained!

Want to learn more or chat gear? Reach out to a Ski expert here on Curated for free, personalized advice and recommendations.

Thomas Harari
Ski Expert
I've spent the last 9 years working with college students (or being one) at Montana State University in Bozeman Montana - just minutes away from Bridger Bowl, Big Sky, and countless backcountry opportunities. With so many new students needing gear each year, I have become a go-to-guy for help buying...
View profile

Ski Slope Ratings Explained
Ever wondered what the difference between a Green and a Blue is? A Black Diamond and a Double-Black? Ski expert Aaron Bandler explains.

The Best Stretches for Loosening Up After a Day of Skiing
Sore legs after skiing? Pulled muscles keeping you off the slopes? Check out these stretches from Ski Expert Nicholas Carnazzo to keep your body limber this season!

The Details of Artificial Snow: Is It the Future of Skiing?
If you've spent any time at ski resorts, chances are that you have seen snow-making machines. Read on to learn about man-made snow and what it means for skiing.

An Expert Guide to 10 Ski and Snowboard Resorts Near Denver
Not sure how to navigate all of your options when it comes to skiing and riding in Colorado? Ski Expert Allie Staffen breaks down the best resorts near Denver!

The Best Ski Resorts for Beginners
Looking for a beginner-friendly ski resort to visit this winter? Look no further! Ski Expert Justin Y. gives the lowdown on his top picks of ski resorts for beginners!

How to Introduce Your Child to Skiing
Ski expert Abe F. has been skiing since age two and shares tips from his dad on how to launch children into a lifelong passion for the sport.

When To Level Up As A Skier
Ski expert Abe F. overviews how to know if you are ready to advance as a skier and tips for improving your chances of success.

How to Use The 5 Most Common Ski Lifts
Ski expert Conor Doyle explains how to load and unload from the most common lift types around the world: Carpet Lifts, Tow Ropes, Poma Lifts, T-Bars, and Chairlifts.

9 Ways to Have More Fun on the Mountain
Above all, skiing and snowboarding are supposed to be fun! Check out this list of ways to make a day on the mountain a little more fun.

How to Carve a Turn on Skis
Craving some carving? Ski expert Abe F. walks you through the process and the possible mistakes you might be making so that you can hit the hill with confidence.

How to Make the Most of Early Season Skiing Conditions
We all want to get out on the mountain as early in the season as possible, but early-season can have some pitfalls. Here's how to avoid them.

Ski Boot Flex Explained
Ski boot flex is important to take note of when shopping for a new pair of ski boots! Check out this guide for you'll need to know about the flex of your new boots. 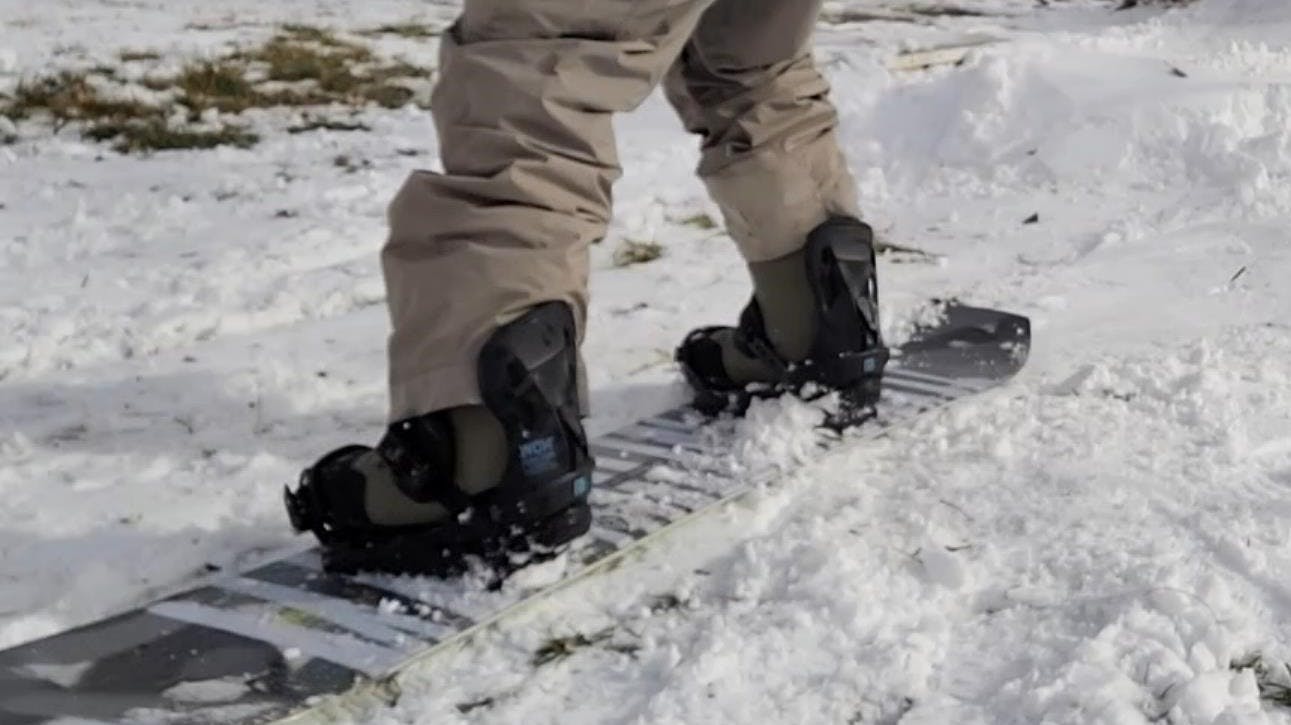 Expert Review: Ride Twinpig Snowboard · 2022
This review is my honest opinion of the snowboard, which I purchased with my own money in November of 2021.

6 Ways to Train for Snowboarding in the Off-Season
Itching to get back on the slopes again? Snowboard Expert Noah Todd shares his top six training methods to get ready for snowboard season.

Frequently Asked Questions about K2 Skis
Check out these FAQs answered by Ski Expert Charlotte H. and then be sure to chat with an expert here on Curated to get any other questions you think of answered.

Expert Review: Marker F10 Tour Ski Bindings · 2020
This review is my honest opinion of the bindings, which I purchased with my own money in January of 2021.

Expert Review: Dakine Men's Stoker GORE-TEX® 3L Bib Pants
This review is my honest opinion of the bib pants, which I purchased with my own money in February of 2022.

What Are Ski Blades and Are They Worth It?
What are ski blades? Who are they for? Should you get some? Read this guide from Ski Expert Hunter R. to find out the answers to these questions and more!

How to Make Friends to Snowboard With
Snowboard Expert Gaelen Mast shares his tried-and-true methods to making snowboarder friends so you can keep the stoke levels high all day on the mountain!

Expert Review for Kinco Lined Heavy Duty Mittens
This review is my honest opinion of the mittens which I purchased with my own money in January of 2020.