What to Look for in Skis if You're a Surfer

If you're an avid surfer looking to get into skiing, check out this guide to see what characteristics in skis will make for an easier transition to the sport!

So the waves are flat but you are still looking to get your adrenaline pumping. What's the next best option after surfing in the ocean? Surfing the mountain! The only problem is, you don’t want to be skiing tight and concise like a slalom skier, you want to flow down the slope, creatively painting your line using the natural features of the mountain. The way to achieve this is to ski gear that best mimics what surfing feels like.

You may be asking, who is this bozo and why should I listen to him? I grew up in Rhode Island and skied all over New England but mainly at Sunday River. RI may be small, but the rocky coastline provides us with some incredible East Coast surfing. We tough it through cold falls and winters with wetsuits, hoods, and gloves in hopes to catch some winter storm and hurricane swells. Then, I moved out to Colorado to partake in the CU Freeskiing team which gave me the opportunity to ski all over the United States.

Now that we’ve gotten to know each other, it’s time to clarify what you should be looking for in your skis to achieve the same flow sensation you get while pumping down the line. The answer all comes down to the profile of the ski.

The profile of the ski is what you see when you look at it directly from the side. Does the ski bow up in the middle? How early does the tip/tail start to rise? How much effective edge is there? All these factors affect the way your ski performs and you will learn which ones reflect surfing the best.

The amount of rocker/camber the ski has will drastically affect how it rides. As depicted above, camber is how much the ski bends upwards making a slight “n” shape. Camber is very effective when skiing aggressively in a traditional style. That bend in the ski assists when popping from one turn to the next. Think of it as a spring—you compress it during the apex of your turn and when you pop to your next turn, the spring gives you a little boost. This type of profile is used heavily in race skis and other on-piste skis.

Rocker, on the other hand, is the opposite of camber. It's the upward bend of the ski creating more of a “u” shape. It can also be defined as “reverse camber” when the “u” shape becomes much more drastic but to keep things simple, we refer to it just as rocker. This is beneficial for a more newschooler, “smeary” style of skiing which helps drastically in powder. Most skis nowadays have a combination of both usually depicted in ski profile descriptions as “rocker/camber/rocker.”

Which one is best to replicate that surfy feeling? Rocker! The more rocker you have in the ski, the more “surfy” it will feel. Rather than having tight turns and fast edge-to-edge transitions, you will draw out your turns and smear from one to another. You will be able to slash natural features easier as if you are smacking the lip of a wave. This sensation will be amplified if you are able to find yourself in some fresh powder.

To recap what we just learned, a heavily cambered ski has more of an effective edge which causes the ski to be great at responsive carving, tighter turns, and stability at high speeds. Aka—all the qualities you would like to have in a slalom ski. A heavily rockered ski gives you that surfer feeling from smearing turns to flowing from edge-to-edge transitions.

There are a few more factors that play into the feel of your ski, but the two main players are the rocker/camber and the effective edge. Some other factors to keep in mind, but that don’t hold as much weight, are the width and the materials used to construct the ski. The width is important for how much float you will have in fresh snow and how easy/difficult it is to go from edge to edge. The core materials play into the flex resulting in the ski being super stiff or flimsy. Both of the characteristics will affect the performance, but not as much as what we talked about previously.

So knowing this now, which ski should you get? Although a fully rockered, reversed cambered ski provides the closest feel to surfing, it may not be the best option. These types of skis are great in perfect conditions, but as you probably already know, the conditions are not always perfect. A slight combination of everything we talked about will most likely be the ideal setup for you. A rockered tip and tail with either a flat (or slightly cambered) midsection is a great option. You still get that flow and surf feel but have more of an effective edge to keep you stable during those fast laps.

A great example of a ski that embodies this middle ground profile we just talked about would be the Armada JJ 116s. These skis have a combination of rocker with some camber to let you surf around the mountain but are stable enough to take laps with speed. You will be slashing and smearing up the slope but have the ability to take groomers with speed and lay an edge in.

If you are looking for a fully rockered, reversed cambered, ultimate surfer ski, then the Icelantic Saba 117 is worth taking a look at. This is a fully rockered ski, but Icealantic strategically crafted the sidecut to maximize the effective edge to counteract the effects caused by the rocker. You get all the benefits of the full rocker to really mimic that surfing feel but still have an edge for when you casually cruise down.

If you’ve gotten this far, you’re probably pretty fired up about skiing right now so I decided to throw in a video that perfectly depicts the stoke of both surfing and skiing and how they can be so similar. The video is GoPro’s “Chasing Advanture” featuring Chris Bent Chetler. Chris is an avid surfer and professional skier that goes on a season-long journey up the West Coast in search of perfect waves and perfect powder.

For a personalized recommendation of the perfect surf ski for you, connect with a Ski Expert here on Curated and we will hook you up with some great options to check out!

Charlie Turchetta
Ski Expert
Charlie here! How can I help?
Like this article?
Share it with your network
Written By

Charlie Turchetta
Ski Expert
Hello!! I am Charlie Turchetta. I grew up skiing the ice coast, Sunday River, Loon, Waterville, etc. I attended the University of Colorado Boulder where I was a captain of the freeskiing team. I was able to consistantly travel all over the U.S. skiing in almost every state possible. While competing,...
View profile

What Are Ski Blades and Are They Worth It?
What are ski blades? Who are they for? Should you get some? Read this guide from Ski Expert Hunter R. to find out the answers to these questions and more!

Expert Review: Blizzard Bonafide 97 Skis
This review is my honest opinion of the skis, which I bought with my own money in February 2018.

The 9 Best Beginner Skis for Women
Learn what sets a beginner ski apart and go over some of the best options for women's beginner skis with Ski Expert Hunter R.

The Best Ski Resorts for Beginners
Looking for a beginner-friendly ski resort to visit this winter? Look no further! Ski Expert Justin Y. gives the lowdown on his top picks of ski resorts for beginners!

How to Choose Avalanche Safety Gear
Gearing up for a trip into the backcountry? Don't forget the safety gear! Ski Expert Hunter R. details everything you need to know about beacons, shovels, probes, and more.

An Expert Guide to Carving Skis
Ski Expert Luke Hinz explains what specifically makes a ski a carving ski, how carving skis work, and a step-by-step of how to carve turns on the mountain!

Expert Review: Moment Wildcat 108
This review is my own honest opinion of the skis, which I bought with my own money in December 2020. 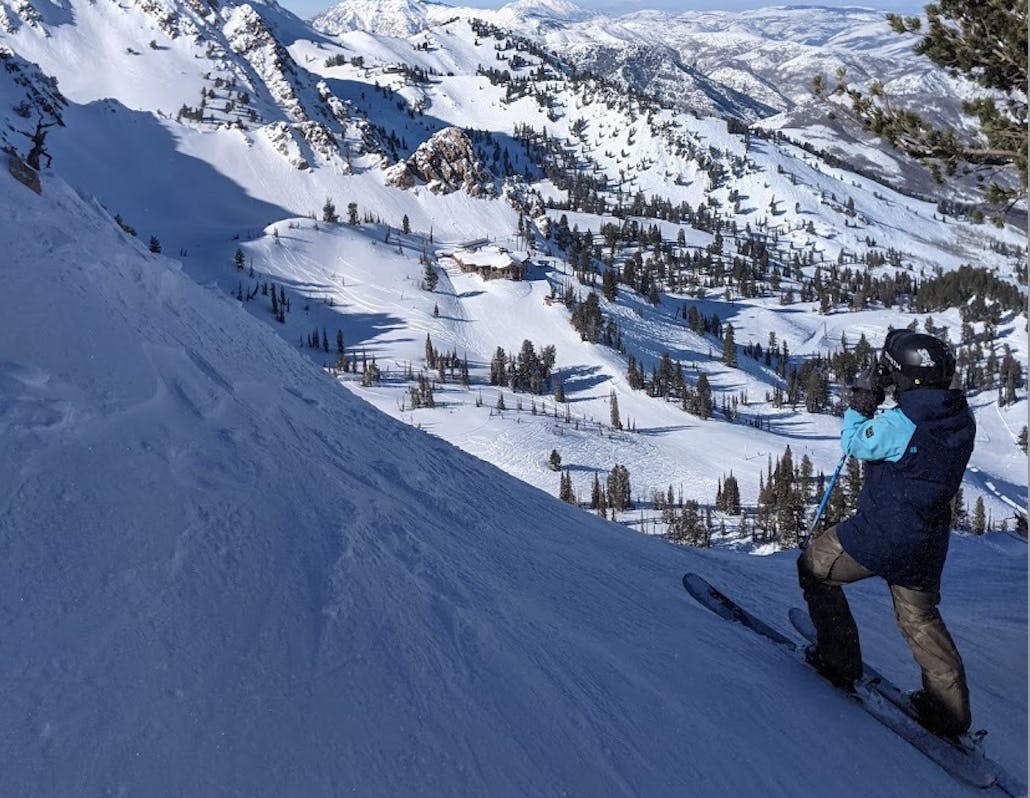 Expert Review: Line Pandora 94 Skis · 2022
This review is my honest opinion of the skis, which I bought with my own money in February 2021.

The Most Recommended Skis for Intermediate Skiers
It's finally time to upgrade from those beginner skis! But which skis should you upgrade to? Ski Expert Luke Hinz lists the best intermediate skis.

The Best 10 Skis for Powder
Ski Expert Luke Hinz wants to help you be ready for those deep snow days this winter! Check out his list of the top 10 Expert recommended powder skis.

Expert Review: K2 Mindbender 108ti Skis · 2022
This review is my honest opinion of the skis which I purchased on my own in January of 2021.

Expert Review: Dynastar M-Pro 84 Skis · 2021
This review is my honest opinion of the skis, which I purchased with my own money in January of 2021.

How Hard Is It to Learn How to Snowboard?
Wanting to get into snowboarding but a little intimidated? How hard can it be anyway? Snowboard Expert Gaelen Mast answers this question and gives a few tips for beginners!

Expert Review: Dakine Men's Barrier GORE-TEX® 2L Shell Jacket
This review is my honest opinion of the jacket, which I tested as part of a demo program for 14 days in January of 2022.

Expert Review: Union Explorer Split Snowboard Bindings
This review is my honest opinion of the snowboard bindings, which I purchased with my own money in August of 2021. Expert Review: Salomon STH2 Wtr 13 Ski Bindings · 2022
This review is my honest opinion of the ski bindings, which I purchased with my own money in November of 2020.

Snowboard Stance 101
Trying to figure out how to pick the perfect snowboard stance and the binding settings to go with it? Start here with this simple explainer.

How to Choose the Best Ski Skins for Your Backcountry Adventures
Ski skins are an essential part of your backcountry ski setup! Learn what to look for in ski skins and which skins would work best for you with Ski Expert Luke Hinz.

Expert Review: Union Women's Milan Snowboard Bindings 2022
This review is my honest opinion of the bindings, which I purchased with my own money in March of 2022.

How to Snowboard in Icy Conditions
Snowboarding expert Alex Dolan shares everything you need to know to prepare for icy conditions so you can ride hard, stay safe, and have fun!

Expert Review: Burton Custom Snowboard · 2022
This review is my honest opinion of the snowboard, which I bought with my own money in February 2019.

Breaking Down Different Kinds of Skiing
Curated overviews seven types of skiing, from basic history and notable figures to the type of equipment you'll need.